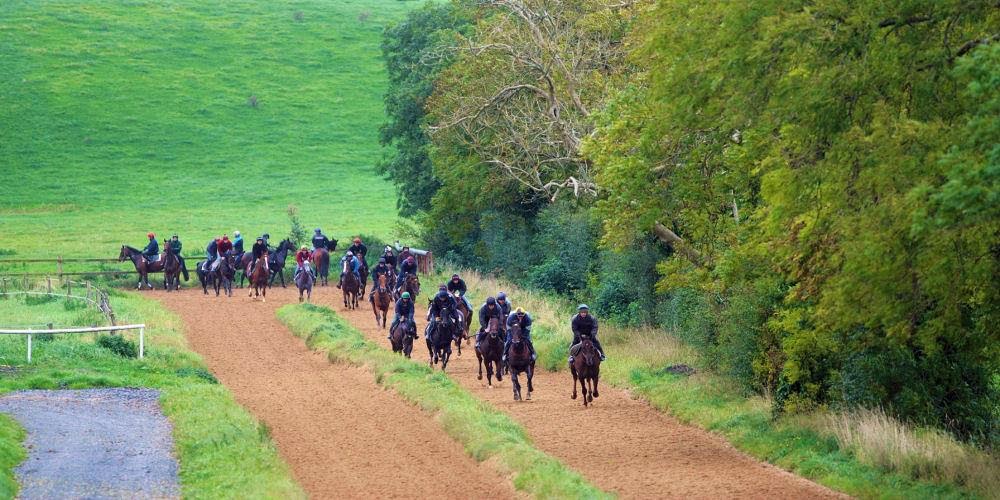 BONNY KATE GETS OFF THE MARK OVER FENCES

The Noel Meade trained Bonny Kate made all the running to win the opening Auld Stand Ratoath/Kellys Pub Ashbourne Beginners Chase at Fairyhouse today, capitalising from the unfortunate exit and eventual loss of 4/5 favourite Alvisio Ville in the race.

Ridden by Sean Flanagan, Bonny Kate maintained a good gallop throughout and in the end stayed on strongly in the home straight for a six lengths win over Marinero.

Following the win Meade stated “jumping and staying is her game so we let her roll along. Sean (Flanagan) said she lost her rhythm a bit when he gave her an ease but she jumped well when he asked her to go on.

"She's a really good looking mare, and is a full-sister to Mala Beach. We'll probably look at mares races, although they are fairly hot at the moment, and we'll find something around Christmas." 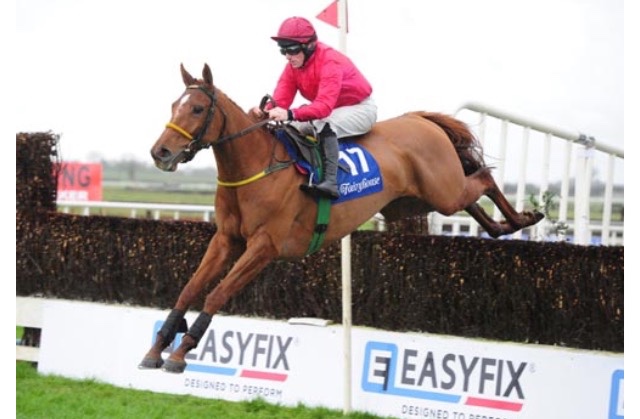 5 runners off to Fairyhouse today:
Runners as follows:
BONNY KATE
2nd last time out in naas 3 weeks ago, she jumps well so hoping to have a good run again with seanf Flanagan back in the saddle.
ICE COLD SOUL
Disappointing last time out in Fairyhouse , he seems to be in great order at home & tongue tie on first time, Sean Flanagan takes the spin this time.
CLAY ALLISON
first trimester for this 4 year old by primary, he's going well at home in his work so hoping for a good run with Ger Fox in the saddle.
WES HARDIN
unlucky last time out with a lot if interference at the last hurdle in punchestown, he will love the heavy ground and Ger Fox gets the leg back up on him & with his 3lb claim he should run well.
DE NAME ESCAPES
impressive last time out in down royal, he's stepping up in trip this time and with Mark Walsh back in the saddle, we hope for a good run
Posted by Tu Va Stables at 10:14

*** Goodmorning, we are off to Gowran Park today with 3 runners***
Runners as follows:
GUNNERY SERGEANT
Impressive bumper winner last time out in punchestown, making his debut over hurdles today , he's schooling well at home so hope for a good run from him with Bryan cooper on board.
FAIR RETURN
he ran well last time out, finishing 4th to no more heroes, Hoping for a good run this time Mark Walsh takes the ride.
MONKSLAND
Very unlucky to miss the last hurdle in the grade 2 in Navan 2 weeks ago, he's making his debut over fences today , he schools well at home and Sean Flanagan in the saddle were hoping for a clear round and a good run.
Posted by Tu Va Stables at 16:39

Monksland debut over fences a success

Monksland definitely frightened his connections and backers by hitting the first fence in the straight with a circuit to go, but it was a case of all's well that ends well for Sean Flanagan's mount in the Irish Stallion Farms European Breeders Fund Beginners Chase at Gowran.

The big three came to the fore as things got serious from before the straight - it was 12/1 bar Monksland, Roi Des Francs and Noble Endeavor.

However Monksland showed his undoubted class on chase debut to pretty convincingly gain the day by a length and a half and seven and a half lengths from Roi Des Francs and Noble Endeavor.

"We said we'd take our chance over fences and see how it goes and if it didn't work out we could go back to hurdling," said winning trainer Noel Meade.

"His schooling went great and he has spent half his time swimming as well. When he jumped he jumped well.

"We thought with the Grade 1 at Christmas he might struggle but if he took to jumping fences you wouldn't know where he could go.

"You'd have to be happy with his first run over fences. He did run in a point-to-point but that was his first chase.

"He was good other than the second last first time when Sean did well to stay with him.

"That's his first winner for me and I'm delighted for him. I've been very pleased with what he's been doing. He has great hands and horses jump great for him.

"He comes in to ride a couple of mornings and does a lot of schooling. He's a really nice lad too." 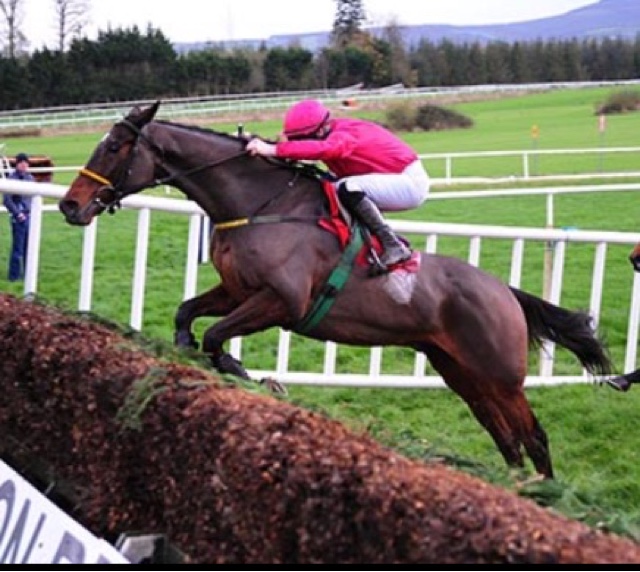 Showem Silver and
(Healy Racing Phot
Nina Carberry rode a winner in her own colours when Showem Silver powered clear in the closing stages to land the concluding bumper at Fairyhouse.

The Noel Meade-trained gelding was easy to back before racing, from 5/1 out to 9/1, but attracted some support on course and was returned 7/1.

Carberry produced the Winged Love gelding to lead at the two furlong pole and he pulled clear inside the final furlong for a four-and-a-half length success.

The Willie Mullins-trained newcomer Merry Night(8/11) was a warm order in the two-and-a-half mile contest but was caught for foot early in the straight before staying on into second.

The winner had finished mid-division on his sole previous outing in a Punchestown bumper in April.

He is out of a half-sister to Aran Concerto, and Nina bought him (for 15,000) at the Derby Sale last year. I think he is now for sale,said Meade.

He's  a nice horse who stays well, jumps well and loves soft ground. Its a long way for a four-year-old, and he should come on a bit. 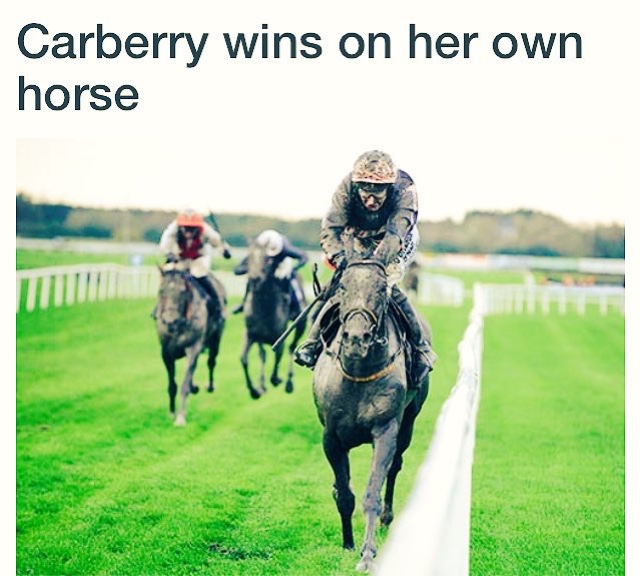 Sunday runners:
4 in punchestown
2 in cork
1 in Cheltenham
Wes Hardin:
he was unlucky to be brought down on the flat in down royal last time out, he will relish the ground today so hoping for a good run with Ger Fox in the saddle.
Harvey Logan:
first run since last December for this fella, he won two nice races last year and seems to be going well at home , Alan Crowe takes the ride on him today.
Killer Miller:
After winning his beginners chase last week at Naas impressively, Today he goes for the Grade 2 novice chase with Mark Walsh back on board.
Cherokee Bill:
first appearance on the track for this lad, he's a big horse and he does all his work at home well, hoping for a good run with him with in form jockey Nina Carberry in the saddle.
CORK
Bel Ami De Sivola:
First run for him since coming to Tu Va, schooling well at home so hopefully he runs well.
Officeux:
Second run of the season for him, ran a bit keen last time out, he seems to be settled away at home now so hoping for a good run from him.
CHELTENHAM
Waxies Dargle:
Winner last time out in May at Killarney, he done it impressively winning by 2 3/4 lengths.hes going for the Geatwood hurdles today and it's his  First run back since May and it's a competitive race, but he jumps well and hoping for a good run.
Posted by Tu Va Stables at 09:25

Grade 2 success for road to riches

Road To Riches stormed clear in the closing stages to make an impressive return to action in the Clonmel Oil Chase this afternoon.

Bryan Cooper made the running on the Gold Cup third in the Grade Two contest and he was asked for an effort two from home in the two-and-a-half mile contest.

Noel Meade's charge really got motoring going to the last and he produced a fine leap at the final fence to seal matters.

The Gamut gelding, carrying the first colours of a trio of Gigginstown runners, stayed on strongly on the run-in to record a six-length success over Bright New Dawn.

The winner had been available at even-money this morning but was strongly supported and ended up going to post a 8/13 shot.

I don't usually sweat about runners but I couldn't sleep last night,badmitted Meade.

I was thinking would he fancy the track or the ground and going two and a half miles around here. You'd have to be happy though and he jumped great.

œBryan said he was full of running going down to the last and there is no question that he stays three miles.

We know what to do with him now but don't know where we go next. Michael (O'Leary) mentioned the Durkan Chase but I think three miles would suit better. I'd rather run in either the Lexus or King George.

Everything in the outfit (Gigginstown) is done on a discussion basis and there'll be any amount of discussion but the Chairman usually rules anyway!â€

Cooper said:- he did it well. It was tough work out there. Conditions were hard as there is a good strong headwind.

To be fair having to make the running on your first run isn't ideal. A lot of things went against him, the track, the ground, the trip, but he had to come here and he did it well. Hopefully he's open to more improvement.

The extra week or two we got (coming here) instead of Down Royal probably left us better for today than it would have for Down Royal so that helped out.

I was impressed with his jumping. When I needed him he was very good and he couldn't have done it any better.

I committed him down to the last. In these good races you don't want to be sitting up. Types likes him are used to going forward. He got me out of trouble.

He's  a nice horse to look forward to. He can go two-and-a-half but ideally probably three miles is better suited.

We have plenty for the staying division so we'll have to see where we are going with them. 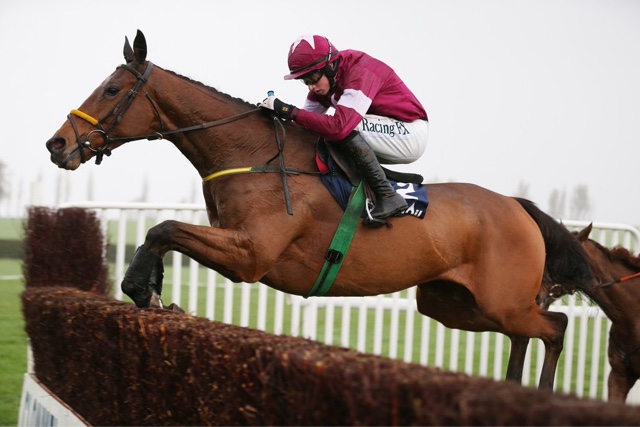 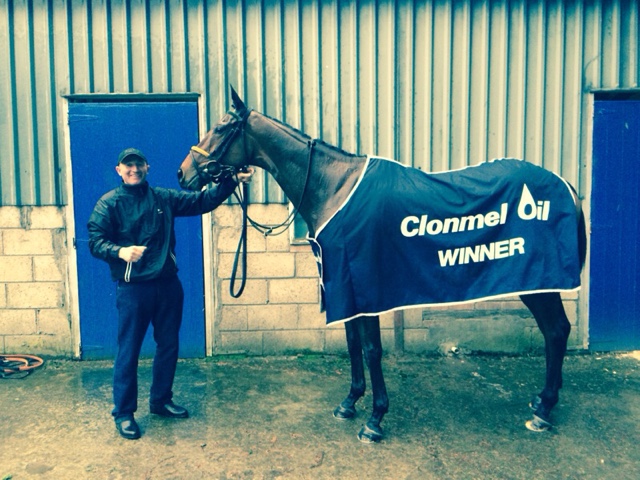